Google Removes Parler From App Store, Could Also Be Removed From Apple’s If It Doesn’t Implement A ‘Moderation’ Plan

In the past I’ve often rolled my eyes when people compared the American Ruling Class to Nazis, Stalinists, or other totalitarian governments. I’ve always felt it was a gross exaggeration that diminished the citizens who really did suffer under these regimes. No more. Short of extermination camps, we have become the modern day equivalent of everything represented by these terrible societies. All of our free speech and other civil liberties are systematically being stripped away. All of the institutions of influence–mainstream media, Hollywood, Big Tech, education, TV, social media, etc.–have been taken over by Deep State socialists. Our only remaining outlet for correcting wrongs–elections–have become ridiculously corrupted, and simply discussing election irregularities is now deemed “inciting violence,” leading to complete bans from social media. And to complete the totalitarian repertoire, the Ruling Class is demonizing and attacking an entire class of people–Trump supporters & American patriots. Is it any wonder anger has boiled to a level not seen since 1861?!

You would think in a sane world, if there’s any group of people in the country who sought to protect free speech, it would be journalists. But other than a few diminishing voices on Fox News, good luck finding a single person in the mainstream media who is NOT now forcefully behind the extinguishment of all conservative and libertarian voices. And it is more evidence they’re part of the same behind-the-scenes Deep State Ruling Class machinery trying to subjugate Americans to a 1984-like totalitarian society.

The recent protests at the U.S. Capitol have been used as a justification for the latest purge of voices on the Right. You’re seeing the perfect example of how any kind of censorship is dangerous. Banning “hate speech,” removing “misinformation,” stopping “violence-inciting” speech, or whatever your justification, they all suffer from one fatal flaw–who decides what qualifies! You’re never going to remove the flaws and biases of the people in charge of the censorship. In the case of Big Tech, you’re usually talking about young programmers from ultra-liberal California who don’t have the life experience or balanced education to be good arbiters of speech. So now, because of the Capitol protest storming, just discussing election irregularities is being used as justification for complete bans, even when people like Trump come out and forcefully say, “NO VIOLENCE.” In the case of Parler’s ban, Big Tech cites lack of “content moderation.” In other words, everyone must toe the censorship line and stick to the same Deep State scripts, or you’re gone! Even if you try to moderate content, you’re talking about millions of posts and comments every day! It’s simply not possible to find every phrase that may or may not incite violence. All these Big Tech fascists need to do is scan comments until they come across a few posts within the millions, then use them as the reason to take out any voices with which they disagree.

Utah Man with a History of Organizing Violent Antifa, BLM Protests, Was Inside the Capitol

Another commonality about totalitarian regimes of the past is to engineer protests, rebellions, or other “emergencies” and “threats to public safety” so the public tolerates a crack down on civil liberties. Has anyone seen any of this in America? Maybe Covid-19, Black Lives Matter, Antifa, U.S. Capitol protests,…?

Two years ago I wrote a novel called The Vigilante Terrorists. It was a dramatization of the type of civil war that could happen in this country, as well as how behind-the-scenes Deep State power could be used to manipulate the public and destroy the lives of political enemies. Like the book 1984, I fear my book is becoming far more true to life than I ever imagined. I absolutely do NOT advocate violence or destruction of property because it’s always innocents who bear the brunt of the suffering, and it only invites more crackdown by the Ruling Class. Short of that though, it’s time for all-out war against these despicable people! 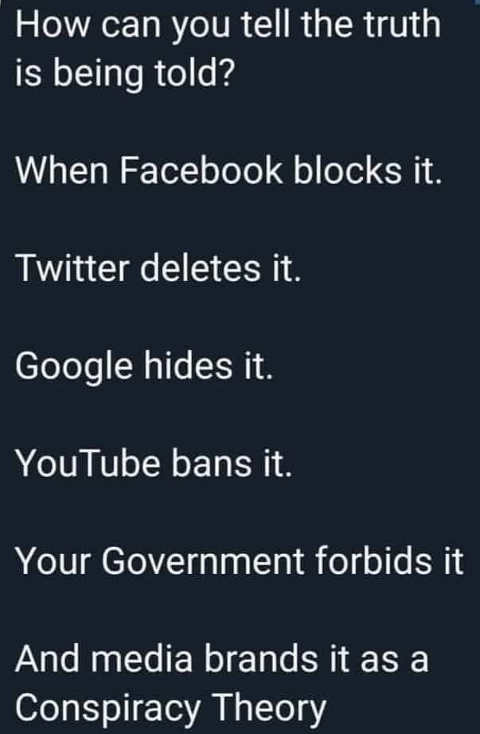 There’s been a lot of doom and gloom going around in response to the election of Joe Biden. It definitely justified to be somewhat down in the dumps that the vicious, corrupt tactics of the Left & Ruling Class over the past four years are being rewarded. However, things are not as bad as they seems. Let’s consider the positives:

I’ve always believed that things have to get far worse before they get better. We’re about to enter that period, but trust that America is too strong to stay down. We will get through the Biden presidency and emerge stronger than ever!

Lesson of the Day

Tweets of the Day

Quote of the Day

Message of the Day

Question of the Day

Random Thoughts of the Day

While I have zero trust in polls and think voter enthusiasm may give Trump an upset in the electoral college November 3rd, consider what he has going against him:

All of the above should in theory be neutral, but they’re all indisputably lined up against Trump. They don’t even try to hide it anymore. There are plenty of reasons to vote against Trump, but it doesn’t explain the massive forces lined up to destroy him. He is a true disruptor to the whole power structure of the U.S. and the world, and they can’t control him. To me, the more these forces oppose him, the more I want to re-elect him. Judging by his support with regular Americans, I can see I’m not alone.